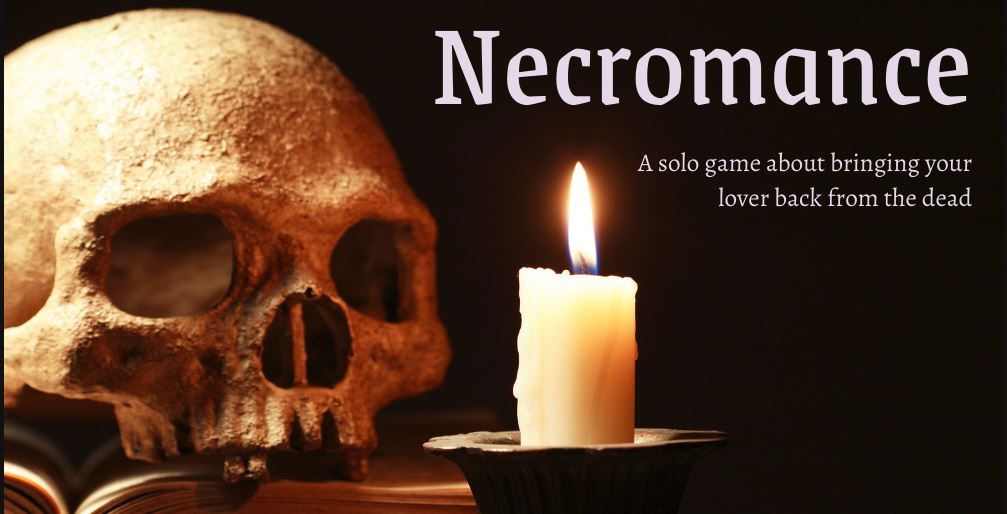 Your lover has died, but you know a way to bring them back. Can you find enough components of your ritual to revive them?

These are content warnings that are from the game prompts and are present in all playthroughs.

These are content warnings specific to this playthrough only.

Lover: Et Tet Qet, a ropemaker, married to a baker they no longer loved

How did they die?

He drowned after a boating accident on the delta.

What’s one of your favorite things about your home in the forest?

Everything sinks into the bayou

What’s something that unnerves you about the deep parts of the woods?

Sometimes those things rise back up


One sprig of anise, pinned behind a ring of copper for protection +1 Resource

This is your home. How do you feel about it now?

I’ve covered it in the markings to preserve the body, they started to scorch away the wood if they were left intact too long, so they’ve been carved, scratched out, and recarved over and over again. I’ve had to use other... ingredients as well. The remains are stored in the basement.

They won’t like what they see when they come back, but I’ll be able to fix it. They’ll understand eventually what I had to do.

Where you will perform the ritual

It's a little ways away from the cottage, on solid dry grounds. The moss is hanging like curtains all around, keeping everything else, both human, beast, and magical, away.

I killed their forehead as I set out to get the rest of the supplies.

A forest spirit steals something from your bag. -1 Resources

I should have known as soon as I stepped out of the circle of ash and moss that the damned spirits would be against me. A beast, smaller than a possum, but larger than a rat, with spindly little fingers and large eyes the size of oranges snarled and giggled at me as it pulled its hands out of my bag.

It grasped some of the salt that I had taken with me, shoved it into its mouth, and ran off into the woods.

You find wild thyme and get a few clippings +1 Resource

I followed that damned beast for as long as I could before it disappeared into the night and darkness. There was no point in chasing further. It was gone. But there was something else on the wind. Something that wasn’t natural here, so I followed it until I found another clearing of wild thyme.

Wrong season, wrong temperature, wrong region for such a plant. Something was making it grow. Whatever it was I took part of the plants. Its power was now mine and I didn't stay to find out what it was.

You find a nest with hatched eggs. What gift did you once give your lover? +1 Resource

The remnants of life still remained in the shells and nest and I slipped them into a wooden box inside my bag so they wouldn’t be crushed. The chick was long gone, probably out stealing feathers, fur and other forgotten bits and bobs from the swamp to make its own nest.

I thought of the gloves that I gave them. They were a size too big, but still made of soft doeskin with gold embroidered flowers around the edges. The previous owner didn’t need them anymore.

It was something they could have never afforded, and would be suspicious if seen. But they still wore them when they were with me.

What is your favorite time with your lover? +1 Energy

I remembered when I “found” one of those fancy music players. I barely knew how to set it up, but they got it working after fiddling with it for a while. We were able to play one of the cylinders that were in the box stored below it.

We danced the entire evening until their feet hurt and my knees were sore. I still have the player tucked away in a corner, collecting dust. It was too big and noticeable to sell in town.

What do you look forward to the most when you get them back?

They promised me they were finally going to leave their husband. They hadn’t slept in the same room for months and every time they talked about him they rolled their eyes.

He was a dull simple man, boring in every aspect, and I knew he wouldn’t put up a fight. Both verbally and physically, but I doubt it would come to the latter.

We would finally get out of this miserable swamp and go further inland.

You see a sign that says “Don’t Anger the Witch”

Something else is here then. I know those in town wouldn’t dare to call me that. I don’t know who is trying to take over my territory.

You see old stone steps and can survey the landscape

The old steps were carved with runes and writing to keep it from weathering. They were sturdy enough to climb and I set about searching for anyone else in the area.

There was a group camped by the road, one too large to take down by myself. There were other animals prowling and a tree spirit nearby.

She was the sort to bestow peace, should you bring her something.

I stopped by the old stream and took out the yellow livered candle, lit it, and held my other hand under the water. I stole the energy from the stream and redirected it into myself. The night was young and long.

I looked up from the river and saw them floating gently towards me. A pair of water hyacinth’s, barely visible in the moonlight, but still completely distinguishable.

They were Et’s favorite. They would always wade out into the water to get them, no matter how many times I told them not to, no matter how cold the water was or how fancy their clothes were.

Nothing would get between them and the flowers. I pulled my hand out of the water and fell against one of the trees. The candle slipped from my hand and extinguished. I did my best not to scream out.

You are tired, hungry, and you think you smell bread. -1E

It was in the wind. That distinct smell of baking bread. The yeast and the flour and the salt mixed and browning in the heat. Was it the other witch? There were no other cabins here. I had made sure of it a long time ago.

I searched, following the scent as quietly as I could through the waters and the trees, but I could not find it. I felt my stomach rumble and ate some of the food from my supplies, but it wasn’t enough. I was starving from a hunger that wasn’t real. Something was taking my energy.

You find a good foraging spot even though you have never seen this area before.

I felt a tug at my guidance stone and followed it into a clearing on solid ground. In the moonlight where there had been none previously, there were dozens of bushes sprouting pale, almost translucent berries.

This place had not existed before. I know these swamps better than any other place, and this is a different realm I have entered.

The copper ring held fast against my clothes so I knew there was no danger here. I ate my fill of these berries, but still I satiated no hunger.

I cast three stones from my pocket, a marker to find later, and I would return here when the time was right to forage.

You feel alone but you know you need to continue.

The hot night and the moon beat down upon my brow and I can feel the weight of my sac grow heavier and heavier.

You remember an elixir for energy and luck. +1 E +1R

The bag was heavy in my hands and I sat but for just a moment. It had come to using the elixir. I pulled it out and met with the eye that swirled around inside the jar. Its pupil constricted and it swiveled away from me.

I cursed, spat, and guzzled the foul liquid, trying not to think of the contents. It tasted more putrid than I remembered and I had to keep myself from retching.

I upended the jar and crushed the eye under my boot, completing the spell, then took what little chewing tobacco I had left and sat for a while.

When I got up again I felt better. The hunger had receded and the sack was no longer as heavy. I knew the luck had also kicked in as my boot made contact with the remains of an old skull.

It was small, delicate, and deformed: a bird with two beaks and three eye sockets. Powerful. I placed it in the box with the nest and shells.

You remember your first kiss and it fills you with determination.

They had been walking alone at night, confident and stupid. I didn’t know that they lived in the village, I was barely a part of it myself. We had left each other alone, as was our silent arrangement.

But they were out that night in the forest, returning home from the river, doing, doing who knows what.

I had my knife out, and told them if they screamed it would be so much worse. But they just laughed. This made me angry at first, but then they approached and got right up in my face.

I didn’t know what to do at this time, no one else had been this brave. They slapped me once, hard, right across the eyes.

I raised the knife, ready to finally kill them, but then they took my face in their hands and kissed me.

Turns out I was the idiot that night.

Tall, tall trees, and a swirl of moths flying into the sky.

A lonely place with trees taller than they have any right to be out here in the swamps. There’s too many of them, and all are a bit too close. The moss hangs down in thick sticky ribbons and the bugs are starting to bite.

Below one of the trees there is a small opening. There should have been something in there, but when I shined the light, a cloud of moths flew up towards the moon. They hovered for a moment then dispersed.


I returned to the glad where their body lay on the scorched earth. I entered through the ring of ash and moss.

I crushed all of the ingredients one by one, then combined them with the blood from a previous incursion in the woods.

I painted their body, slowly, steadily, meticulously until they were covered with the correct symbols.

I felt myself grow colder as I painted, knowing my life was transferring into them.

I paused letting their body soak in the energies of the moon and the wind around. The symbols glowed and began to pulse.

I was shaking. Hungry. And they were still so pale.

I painted the last marking on their forehead and I swear I saw their eyes move.

I swayed, but I held their head in my lap, forced their mouth open and placed the thick candle in between their teeth then lit it.

The candle turned from white hot to a dark void, consuming light, making everything around them darker, colder. To look into it was to see Nothing. I was beginning to tremble.

I coughed a black viscus puss and my vision swam. It was too much. I flailed and grasped onto their hand before I hit the ground. I couldn’t move except the shaking of my limbs. I saw the candle extinguish. I saw the paint run from their body and return to the earth.

It was over. They were gone. 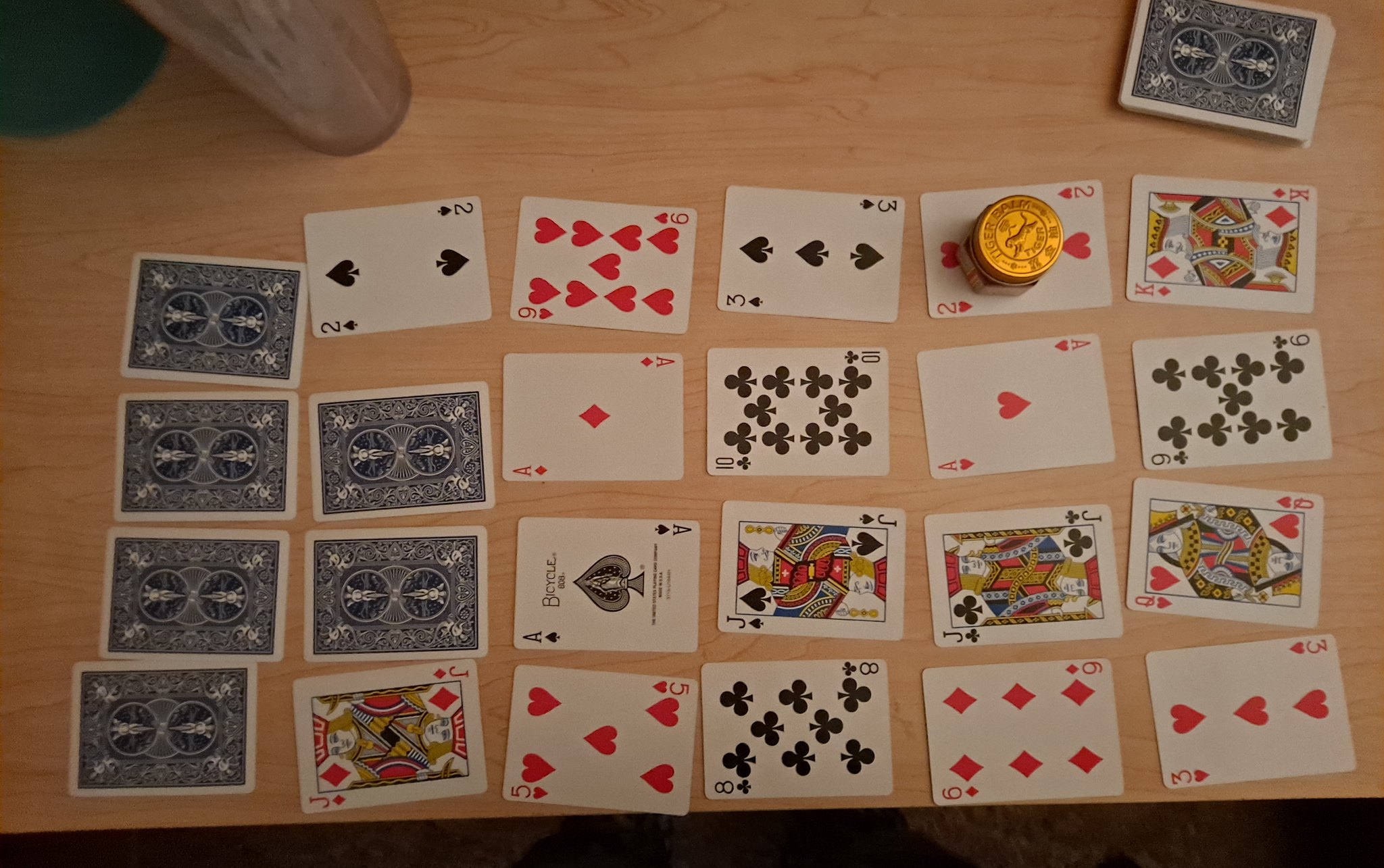