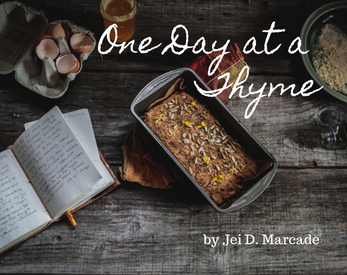 One Day at a Thyme By Jei D. Marcade

You play as a witch in a little cozy cabin in the woods. Each day you encounter guests and try to help them as best you can. They can range from villagers to talking bees to mice and all sorts of little creatures.

These are content warnings that are from the game prompts and are present in all playthroughs.

These are content warnings specific to this playthrough only.

A/N: For further clarification, entries that all have the same day number take place on the same day.

My home is on the side of a large mountain covered in snow. The door faces South as all good doors should. I can see the village from my porch where my 3 cats lay in the warm sun. My windchimes glint and clink along with the wind. Inside it is dark but with enough light to see your way. I have a large pot on the stove, quietly simmering with a large batch of soup. The counters are filled with jars of spices and herbs.

Card: 8 of clubs sweep the floor.

Today I managed to sweep the floor free from cat hair. I love them but I should really think about a hairless cat next time. I’m glad I was able to accomplish this today.

Roll: 2 a mystery or conflict

Card: Jack of Hearts, Mouse with a sword.

After I had managed to finish sweeping I heard squeaking and yelling on the porch. I figured the cats had caught another vole and went out to clean up the mess. This time it wasn’t a simple creature but one of the mouse-folk with a sword. He was about a foot tall and was swatting away at my cats who were swiping and hissing at him. I shooed them away and  invited him inside and listened to his troubles. He was in search of a rare plant for his village. I nodded along and told him the last place I remember seeing the herb. He thanked me profusely and quickly left.

Card: King Hearts, a full portrait who travels through paintings

After the mouse left I went about finishing up the rest of the chores until another guest arrived. The landscape painting shook and rattled against the wall until the figure of a woman arrived front and center. She was made of paint and moved like a stop-motion animation. I was startled but stranger things have happened. She waved to me and we talked for a while through gestures since I didn’t know her sign language. She was a traveler through paint and was merely passing through.

Luckily my guests didn’t take too much more of my time and I was still able to hang the herbs I had collected earlier. I strung them up in the kitchen to dry for the day.

Then the urn started talking again. I sighed, grabbed one of the books from the shelf and sat down next to it on the floor. It prattled on and on and I occasionally would look up and ask it a question. I wish I knew how to make it stop other than pretending to listen to it. Eventually it stopped after an hour and I was able to go to bed. What a busy day!

I went out to the hive again today. I spoke with the bees and they parted and let me collect their honey and continue to fix the fallen hive. We still don't know who or what smashed it. They suspect foul play and I think it was the weather. It's hard to convince bees that hail exists when they want to blame everything on the bears.

Card: 9 of clubs paint a mural on the wall

I had been thinking of paint-woman ever since I first met her. I can’t keep her out of my mind even though I only saw her once. I started painting a giant mural on the North side of the cabin, hoping that she would appear again. I continued to work on it today and managed to finish one of the trees.

The bees were more than happy to let me take away the broken bits of the hive they couldn’t use. I’ve decided to make candles with the extra wax and keep them for the winter so I don’t have to buy anymore from the village.

As I was sifting through the wax a small stone fell out. It was perfectly smooth and spherical, but made of plain rock. I placed it in a small jar and will examine it later.

Card: Queen of Hearts Three Racoons in a trench coat

“Herbert” came by again today. I could hear the cats hissing at him when he knocked on the door.  I don’t know why they continue with the pretense but there’s no point in dissuading them. All three of them shuffled in and made themselves home on the couch before trying to sell me their junk again. “Herbert” of course is the three racoons in that dirty trench coat I threw out years ago. They dumped all of the junk onto the table and told me fantastic tales about each of the rubbish. Nothing they had was of any worth, but I still felt sorry for him and bought a nice feather from the pile.

“Herbert” only left when there was another knock at my back door, the one on the North side. I left the raccoons to gather their trash and run out the front door.

He was here again for the summer. He had new engravings on his horns and tattoos on his chest. He still wouldn’t tell me his name but I still wanted him all the same. He will only stay for the season but I wish he would stay longer.

Card: Ace of Hearts, another witch

I received another letter today from Cherice. She tells me that the Altar has begun to silence anyone who practices our magic. She seeks to move away from Neahr and come join me in the north. She will leave the city soon and told me not to write to that address again, and she will come write to me again when she is safe.

Card: 10 Spades A neighbor asks you for help

A knocking came at the door when I was kneading my bread. My elbows completely covered in flour and I knew I had some on my face as well since it was itching. An entire village’s worth of mouse-folk were at my door in the snow. I invited them all inside and listened to their troubles. Their hovel had completely frozen over in yesterday’s storm and they needed a new place to stay. I told them I didn’t have enough food to feed all of them, but I would let them use the attic as long as they didn’t antagonize my cats. They agreed and quickly made their way up into the storage area.

I hardly ever see any of the mouse folk except when they leave small gifts for me. Today I found a small flower crown that was the size of a bracelet. They had left it on my pillow without any notice and I nearly crushed it. I placed it on a hook above my bed for the time being.

Spring will be here soon, for I have seen it. I don’t know if she saw me, but I spotted a figure outside in the wet grass. They were a robe floating above the ground, spinning and swirling around and where they touched the ground flowers began to bloom. It is a blessing to see one of spring’s entities in person and I know that this year will be good.